It was clear that the Special Prosecution had suppressed evidence and misused documentary material papers seized at the offices of SCE. Such documents which were clearly to the benefit of the defence just disappeared.

Some documents first came into the court’s archives after the defence lawyers and I had been able to “find them” hidden among the seized material. These documents, which Bagmandspolitiet had had in their possession for years, were seized on the first day from my offices.

It was a fact that many important papers had either been lost or hidden or simply taken beyond any possible use by the prosecution. Even a typewriter ribbon (from an IBM typewriter) seized from my prison cell just disappeared because no doubt, it would have helped my case.

When such grave mischievous actions can be exercised by the Special Prosecution without the interference of the court, it is hardly difficult to imagine the consequences.

Professor of Law, Ole Krarup, said that “I played chess blindfolded“. I did indeed and there was nothing neither I nor my defence lawyers could do about this injustice.

High Court Judge Holger Kallehague, who has always been outspoken, said to Politiken newspaper (12th September 1982) that I was subjected to the same treatment and “injustice” as the suspected witches five hundred years earlier. They would bind the poor women, put her into a sack and fill the sack with stones after which they would throw her into the water. If she drowned she could not have been a witch and was innocent, however, if she got free and came to the surface she must have been a witch and was burned alive at the stake.

When later on the European Commission of Human Right asked Denmark to reply to my complaints, the Danish Government explained the Danish system of justice and referred to the fact that “grave offences are decided by a jury of twelve persons without participation by the juridical judges”.

However, they did not explain that in my case the Special Public Prosecutor had pleaded to the Court to sentence me according to a special section of the Danish Criminal Code (Section 88) which could have meant a sentence of up to twelve years. Such a sentence must, under all circumstances, be considered relevant to a “grave offence” and sentences of twelve years are very rare in Denmark.

Against the background of a possible sentence of twelve years, I was to be judged by one juridical judge who was not only extensively involved prior to the indictment and trial but had made thirty-nine decisions to keep me incarcerated including in solitary confinement.

“I was subjected to the same treatment and “justice” as the suspected witches five hundred years earlier. They would bind the poor woman, put her into a sack and fill the sack with stones after which they throw her into the water. If she drowned she could not have been a witch and was innocent, however if she got free and came to the surface, she must have been a witch and was burned alive at the stake.

The influence of the two lay judges (housewives) was as negligible as one would expect. Claus Larsen, acting as a henchman for his masters, was to be my judge in the so-called trial after he had made close to seventy decisions against me and the defence.

It’s no wonder that my defence lawyer Folmer Reindel said, “I feel that I have been reduced to a defence counsel in a Russian Military Court.” But that was after another one hundred and thirty court hearings of “trial” where Claus Larsen presided alone with the two housewives acting as lay-judges.

“I feel that I have been reduced to a defence counsel in a Russian Military Court.”

My first defence attorney advocate Jørgen Jacobsen’s statement to the Court: “The prosecution could as well hold their “court hearings” at their own offices without the judges, the defence and the accused – the result would be the same.” This statement was factual and sadly correct. Two years later my other defence attorney, Folmer Reindel, told the court that he was reduced to a defence lawyer in a Russian Military Court!

Bagmandspolitiet directly prevented me from having my complaint about my long solitary confinement and treatment dealt with by the European Commission of Human Rights.

Bagmandspolitiet kept a letter for more than two years away from showing me; totally contemptuous of the convention as I was allowed free uncensored communication in accordance with the European Convention of Human Right.

There can be no doubt in my and my lawyers s at the time that this was a deliberate act as the Danish authorities did not want my treatment to be subject to a case at the European Court.

When I sent my first letter and application to the ECHR in August 1980 and did not hear anything for more than two years and 2 months, I felt that something had happened, but I did not know that Bagmandspolitiet had kept the letter away from me.

The fact that I did not know about the letter in September 1980, prevented me to follow up and ultimate from the commission dealing with my treatment by the Danish authorities.

At the outset of the trial in the lower court (Copenhagen City Court), my defence attorney Folmer Reindel said to a leading newspaper, Berlingske Tidende:

“With the collaboration between the judge (Claus Larsen), the prosecution and the prison services, which consequences seriously affect and prevent the defence – I fear a miscarriage of justice”

It was obvious to everyone except the tabloid press.

In late 1979, several incidents took place where people came to SCE and told us various “stories” asking for advice and assistance from the company. At the time we thought that these people must have been sent by the National Bank or the fiscal authorities. Considering the seriousness of such provocateurs, I asked the staff to report such incidents directly to me, moreover, be observant and vigilant. 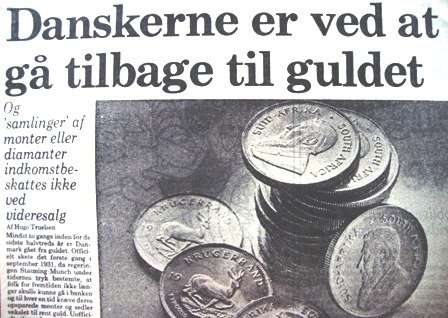 We listed several incidents and in one case I recall a woman pretending to be an investor and claiming to have D.Kr 2 million to invest in silver bars. She told the staff that she had made this money in Greenland and really wanted to take the money out of Denmark. In buying silver bars, she could transport them across the border and sell them outside of Denmark one day. Silver bars were considered as “goods” and subject to sales tax and the EU laws of free movement of goods. We refused to assist her since it could be seen as a way around the strict Danish exchange control regulation at the time. She and the other people were all agent provocateurs sent by the Special Prosecution.

Two weeks before Bagmandspolitiet stormed the companies and arrested me, they had employed an outside accounting firm to help them against me and the companies – considering this, it showed their work behind the scene (this firm ended up making more than D.Kr.4 million in fees).

According to what came out in the High Court during the so-called appeal, Bagmandspolitiet sent a person in early January 1980 to my companies to seek employment, even calling me personally several times and having a serious meeting with us as to working for one of the companies.

Report from the Danish National Bank

An internal report from the National Bank in May 1979 showed that the bank had been unable to find any investors who had had any complaints against the companies and me and it had not been possible for the police to raise a case. This report came to light during the trial.

According to this internal memorandum the meeting was held in the National Bank in May 1979 which concluded that it has not been possible to find customers of SCE which would complain of any wrongdoing with regards to the companies and its owner (me). Further, that investigation by the Bagmandspolitiet has not been “successful” and no person has been defrauded in any way. However, the National Bank wanted to still go ahead with the possible violations of the exchange control. Further, the report confirmed that the companies operated within the current law. 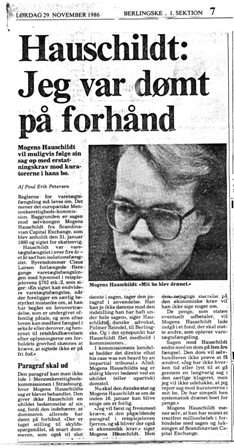 Another internal report from the Copenhagen Tax Authority in October 1979 and the Danish National Bank, four months before the closing of my companies, showed that there were no clients of the companies prepared to make a complaint against the companies as they had nothing to complain about.

All clients had been satisfied in their dealings with the companies. Moreover, the report confirmed that SCE had no legal obligation to hedge the forward sale of precious metal on margin purchase (Deferred Delivery Contract).

This report was made by Christen Amby (see The Red Tax Troll ), who later in the High Court admitted that the fiscal authorities wanted details as to who was the companies’ clients and to find out if they had undeclared (un-reported) money (black money). No doubt that this was of great concern for the fiscal authorities, however, the current tax rules at the time did not require the companies to register the personal details of the client who purchase precious metals and coins over-the-counter. They could provide any name without documentation and pay cash for their investment. We did not have any legal requirement to ask for documentation nor from where they had their money.

Since everything was legal and indeed transparent, we had nothing to hide. We had staff that had close relatives working in the National Bank and we even employed a retired senior police officer to supervise the transport of our precious metals. I employed these people, and I at least expected them to report back to their relatives and families that we did nothing wrong or against the law and that we only operated according to all the rules set out by the government and the National Bank.

We were blackmailed regularly by the Copenhagen Tax Authorities (Københavns Skattevæsen), who wanted access to the names of our clients and their transactions. On one occasion in 1979, they demanded that we pay tax there and then on all future income despite losses in the previous year (we had handed over D.Kr. 200,000; otherwise the tax inspector would not leave our premises).

Making matters worse, we were regularly prevented by the National Bank from being able to hedge our currency and commodity transactions, creating considerable losses for the companies and at times, leaving business transaction as too risky to enter into.

The National Bank put pressure on our banking relationship and in one case, created a huge loss for my companies with Andelsbanken, one of the banks we used. None of these facts was ever reported in the Danish media.

It is with same satisfaction today (2018) to see that more than 1600 billion Danish Kroner has left Denmark to 55 countries, close to 5 years of Denmark’s GNP, according to Børsen, the financial newspaper. Further, that gold, according to Kai Lindberg, a director from Lån & Spar Bank, is used to hide assets for many. 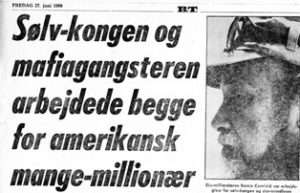 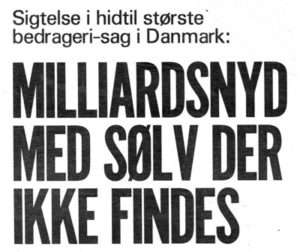 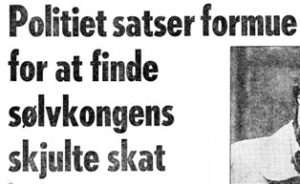 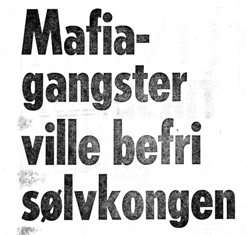 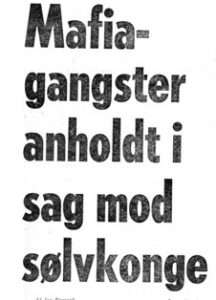 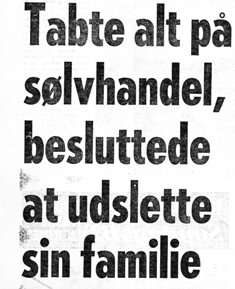 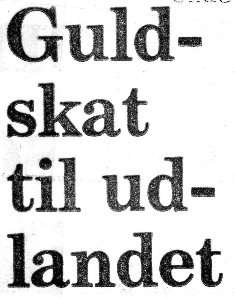 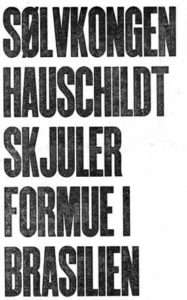 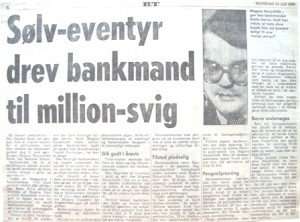 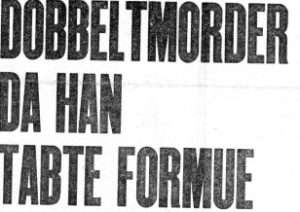 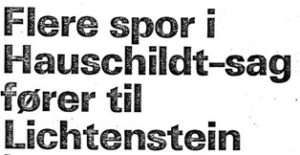 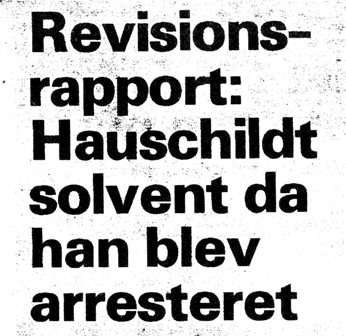